It’s easy to say innovation is important. But implementing it is a far more difficult task. The word innovation has in some ways become synonymous with motivational rhetoric, so without strong leadership, the employees you’re looking to empower to be innovative may not feel your efforts are authentic. Or they’re left asking, what now? Sound familiar?

The 5 Phases of Innovation

A 2018 study sponsored by KPMG described five stages of innovation maturity.1 On average, the study describes roughly 60% of innovation efforts in the ad hoc or emerging stages.

The leadership team at FBFS had been experiencing a renaissance in innovations, but our research-led interviews were uncovering that while it was taking root, it was not yet understood as a fully formed initiative for all to be part of. It was being classified in the “ad hoc” stage.

FBFS was committed to changing that. In fact, they were deeply committed to cultivating a culture of innovation that empowers all of their employees to play an active role. Doing this started with the leadership team promoting the narrative, but it really took form with a focused internal marketing campaign.

The complication of selling innovation is simple — it’s intangible. It’s easy to say, but until innovations happen you can’t “see” it — so you have nothing but a nebulous word to show for it. Our challenge then became to build an internal marketing campaign that would make the intangible tangible by inspiring FBFS employees, informing them on how they can be a part of the company’s transformative future and activating innovation. 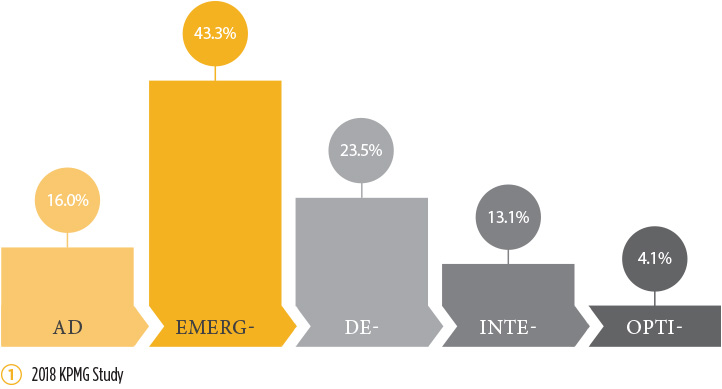 After research was complete, the project launched by defining a 12-month action-oriented strategy for how to promote, launch, run, create and maintain long-term momentum. Creating the strategy was fundamental in deciding how we would name it, visualize it and then select the tactics we would use to implement it.

An outcome of building the strategy first was it allowed us to discover our anchor piece at the center of the campaign. A completely customized toolbox (Idea Box) that allowed for our client to facilitate and develop innovative ideas through its five stages of maturity. It was a cornerstone for all parties involved that allowed us to make the intangible tangible. “Go Innovate!” could now come down from a nebulous rallying cry to a defined step-by-step approach for creative minds to push their idea from “ad hoc” to “optimized.”

After our strategy was set and our anchor piece defined, we fired into a lateral thinking (see pg 14) naming exercise. Utilizing notes we gathered from client meetings and knowledge that an innovation classroom would be part of the equation along side our research, we landed on the name Idea Factory with the acronym IF. The name worked to solved two equations: 1) It defined a place, this was important to the client and to our communication strategy, and 2) It excited our client because they had often said many times the conversations about evolving an innovation start by asking “what if?”

The complication of selling innovation is simple – it’s intangible.

The Power of Effective Video

We knew we wanted to make a great first impression. Something that left FBFS employees feeling inspired and excited. Our editor tasked with bringing IF to life in video was Doug Stephens. He was ready to get going after seeing the art “Great foundation with the design — I am immediately inspired!”

Once the launch video was completed, we packaged it into an email to distribute company-wide. It was time to get the ball rolling on the initiative. The feedback was instant and FBFS employees were taking notice. Affirming comments began coming back to our client that included:

The Idea Factory initiative is still in its launch stages. Our strategy called for a frequency-over-time release of new communication so employees would stay engaged. At the time of this story, 400 individuals had attended the launch event in their innovation space, the Idea Factory. That far exceeded our client’s expectation and now they are ready to begin kickstarting innovative ideas.