Skip to content
Drawing a Line in the Sand

Drawing a Line in the Sand

Being a well-established brand means you likely have a public-facing logo and/or tagline that’s represented your company for a while.

At Flynn Wright, many of our clients have long histories in their respective communities, so it’s not uncommon to get requests like the one we received from EMC Insurance Companies last spring. The company was established more than 100 years ago, and its tagline, Count on EMC®, has been around for nearly the past 17. This led EMC to question the effectiveness and validity of the line. And, with new management in place at the corporate headquarters, some also wondered if it was time for a new tagline altogether.

Our task was twofold: validate the effectiveness of Count on EMC; and explore possible new taglines for the company.

Through a research initiative that engaged EMC’s stakeholders, agents and team members, we gathered significant evidence confirming that these audiences consider the company to be trustworthy, reliable and a partner they could, well, count on.

Our process also revealed that all the right ingredients for a strong brand existed for EMC – they just needed to be fully reimagined – something our creative team does better than any other agency. We didn’t pen “Count on EMC,” but through our research, we knew it had the potential to continue elevating the company. 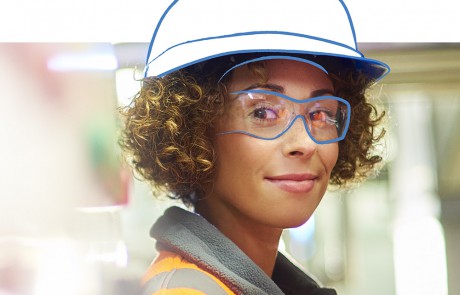 Creative With a Mix of Capabilities

Our research also showed there is room at the top for EMC to break through the cluttered and crowded marketplace with an appropriately bold campaign. Because our recommendation was to keep Count on EMC, we wanted to show the client how, with the right visual look, the tagline could work even harder for EMC.

What we ultimately created was a technique that is visually arresting, extremely versatile and has the capacity to separate EMC from other insurance providers. Once a signoff, the tagline is now brought front and center – used in headlines, as a call to action and as a differentiator from competitors. The copy is friendlier and more approachable. And the overall look and feel can be easily transferred from print to television to digital, all media which is showcasing the new campaign and brand strategy this year.