The Need for Speed

Hoverboards, talking robot maids, flying DeLoreans … the future is nearly upon us. We already have smart refrigerators, thermostats and lights. Soon, even more devices will be here, increasing our efficiency and improving our quality of life – but also adding to the number of devices already dependent on internet services.

Fun fact: there are more internet-enabled devices than people on Earth. That’s a lot of demand for data and speed. So, when longtime client Mediacom informed us that they’d soon be making the entire state of Iowa the first “one gigabit” state in the country, there was a mad dash from our public relations, account and creative teams to make this launch as epic as the announcement. From the new 1 Gig logo to a gorgeous 30-second TV spot to the live press event, we called all hands on deck to make this launch as incredible as it should be.

On a cold day in January, Iowa Governor Terry Branstad, Lieutenant Governor Kim Reynolds and Mediacom founder and CEO Rocco Commisso announced to the world that the state of Iowa has internet service faster and more powerful than some of the biggest cities in the county. 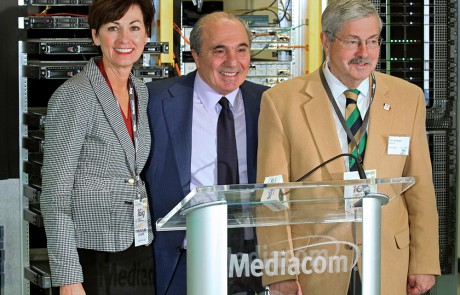 “Thank you for your enthusiasm, and more importantly, for the huge investment you made in Iowa.”Terry Branstad
Iowa Governor

By making 1 Gig internet available to all one million of their Iowa customers, Mediacom has delivered an incredible advantage to the state. Such an impact doesn’t come cheap – the necessary infrastructure required a 1 billion-dollar investment from Mediacom – but it also hasn’t gone unnoticed.

No one ever really knows exactly what the future will bring, but thanks to Mediacom and their 1 Gig rollout, we know that here in Iowa, we say BRING IT ON.